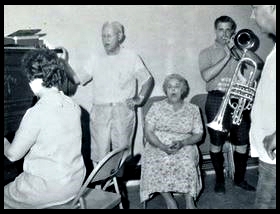 The music that we see in Jules or in T.J., the music comes through Dad, I think. My mother really wasn’t musical at all.

[Marcia]: But she, the inventive streak that so many of you have must have come through her side of the family because wasn’t it her, one of her relatives that invented the coupler for the train cars?

Yes. I think it was Choate.

It was a Choate who invented the. . . . I think it was Choate. He never was able to patent it, but he saw that the trains were held together by chains when he was a young kid. And he would sit by the trains as they were going by and often they would break. He invented that and never got it patented.

[Heidi]: I’m going to tell my kids I invented Post-It Notes. [Laughter] It got stolen from me.

[T.J.]: People with magical minds, much like Grandpa had, your father, many of them are also musically inclined.

If we get a chance tomorrow and we go by a piano, we can maybe get him to sit down and just play a little bit of Beethoven. The last time. . . .

[Kathy]: I wish we still had a piano here.

[Eric]: The Townsend Building has one.

There’s a piano and we can just sit down and let him. He hasn’t done it in a year, but he is . . . I’m very proud to be related to this guy. And he’s very skilled in the piano.

story told by Steve to the family reunion gathering on January 10, 2014; recorded and transcribed by Dawn [Steve’s daughter]; see also William Choate Gets No Credit for His Coupler Design

Can you add to the story? Please do. Write in the box below. (You may need to click “Leave a Reply” above to make the box, name, and address fields appear.)

1 thought on “Music, Language, and the Inventive Streak”

Add to the Story Cancel reply

Is my email safe here?

Yes. Click here if you want the full word on Eight Duncans security.

Read the Most Recent Stories